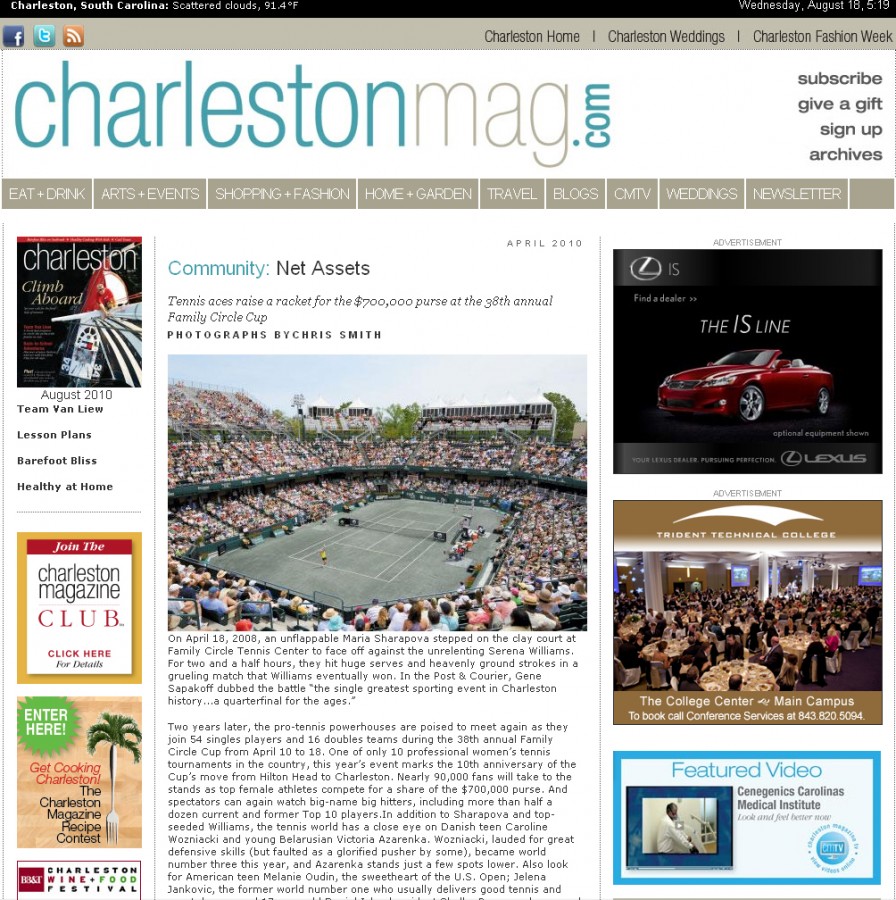 Mike Saia, my “Boss” for the week at the Family Circle Cup when I photograph the professional tennis tournament there every spring, just sent me this note:  “Check out the WTA home page: www.sonyericssonwtatour.com.  Wait for the Flash to move to More News!”  Turns out the Sony Ericsson WTA Tour is using my image of Samantha Stosur, last year’s champion, on their main page.  I love it!!! 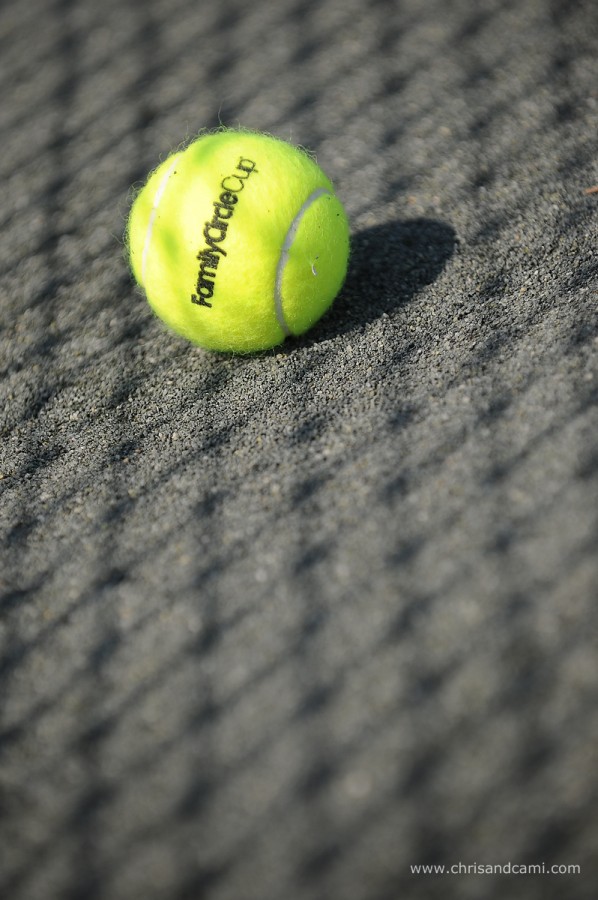 It’s been over a week since the Family Circle Cup, and I’m FINALLY feeling fully recuperated.  J  This year’s tournament was a AWESOME.

Sam Stosur literally CRUSHED Vera Zvonareva to win her second (and biggest) WTA Tour Championship.  She had an amazing 36 winners in the 6-0, 6-3 final that was the fastest in the history of the tournament!  Liezel Huber and Nadia Petrova were able to hold on to capture the Family Circle Cup doubles title, beating Vania King and Michaella Krajicek in straight sets.  King & Krajicek were playing together for just their second tournament.  Huber, the #1 doubles player in the world, normally plays with Cara Black.  This was her first time playing with Petrova!

Aside from the great tournament action, there were tons of off-site player appearances and VIP parties to photograph.  But most would agree that the Game, Set, Rock event with legends John McEnroe, Jim Courier, Monica Seles, and Anna Kournikova was the big hit of the week!

Mike Saia, Communications Director of the FCC, did a great job keeping all the media organized.  My former colleague, Doug Cunningham, retired last year.  But it was nice to see him come back to assist on some of the VIP events.  The super talented Alice Keeney took his place.  She really stepped up to the plate, did a great job filling some big shoes, and was wonderful to work with.  I’m already excited to see what NEXT YEAR has in store!!!

Well, the Family Circle Cup is over!  But what an AMAZING display of power and domination in the 52-minute final.  Samantha Stosur completely dominated Vera Zvonareva and took the championship match into the record books as the fastest final in the history of the tournament!  I think Vera’s an excellent player.  But Sam was just “in the zone”.

“To be able to play that well in a final is a great feeling. You always hope you’ll do that, but to actually go and perform that way is very, very pleasing,” said Stosur, who has now beaten Zvonareva five straight times.

Another fact for the record books is that Sam is now the first Australian to ever win the title!  Up until recently she’s been known as more of a doubles specialist.  But she’s decided to concentrate more on singles and is doing quite well.  This is her second singles title.

“The first title I won is always going to be very special. It took me a while to get that,” Stosur said. “This is bigger than Osaka though. To do it on clay and playing well all week is just a great feeling. You can’t really compare the two, but this is definitely a bigger event and I’m very pleased I was able to play so well.”

Even though the media world doesn’t pay as much attention to doubles as they do singles, I LOVE doubles.  So I decided to cover the doubles final of Liezel Huber and Nadia Petrova vs Vania King and Michaella Krajicek.  Fortunately, somebody else thinks doubles is still an important part of the sport as well.  Tennis Magazine used my photo of the four finalists in a nice article on their website.  Click Here to check it out!

“Game, Set, Rock!” was a HUGE success this year at the Family Circle Cup.  The match between John McEnroe and Jim Courier couldn’t have been any better.  With John showing his deft touch and Jim showcasing that raw power, both champions obviously still “have it”!  The match was tightly contested, ending with McEnroe prevailing in the third set tiebreaker.  Following that, Anna Kournikova and Monica Seles joined the boys for some mixed doubles.  At this point they all put on wireless mics and really had fun with it, making jokes and keeping the crowd entertained with their running commentary.  It made for a late night, but I’m glad I got to stay and cover it from my premier seating on the court.  J  (More at www.chrisandcami.com/blog.)

Part of the big “Celebrating 10 Years in Charleston” promotion at the Family Circle Cup included special appearances by John McEnroe, Jim Courier, Monica Seles, and Anna Kournikova.  Before they went on court for the “Game, Set, Rock!” event, these four celebrities stopped by a VIP dinner party to say a few words, sign autographs, and allow guests to get portraits with the champions!

Here are a few shots from that event along with a photo showing my setup for it.  Since I was basically rushing from photographing a tennis match to shoot this, then rushing back to cover “Game, Set, Rock!”, my portable wireless lighting setup was the best solution.  I used a pair of 8-foot Bogen Manfrotto stackable lightstands, two SB-800 strobes, each powered by an SD-8a battery pack, and firing through my favorite Westcott 43” collapsible umbrellas.  I used my D3 with 24-70 f2.8 and SB-900 attached.  The SB-900 acted in commander mode only, with the remote strobes set manually to 1/8th power.  The whole system was triggered by RadioPoppers and gave me a working aperture of f5.6 at 1/100th.  It took my about 10 minutes to set up and do a test shot, and about 6 or 7 to tear down and get out the door when it was over!

On Semi-final Saturday at the Family Circle Cup, I got to be the exclusive photographer covering John McEnroe’s VIP clinic sponsored by Dunlop.  As a tennis enthusiast, it was pretty exciting being able to just “hang out” with the legend!  More at www.chrisandcami.com, www.familycirclecup.com, and www.wtatour.com. 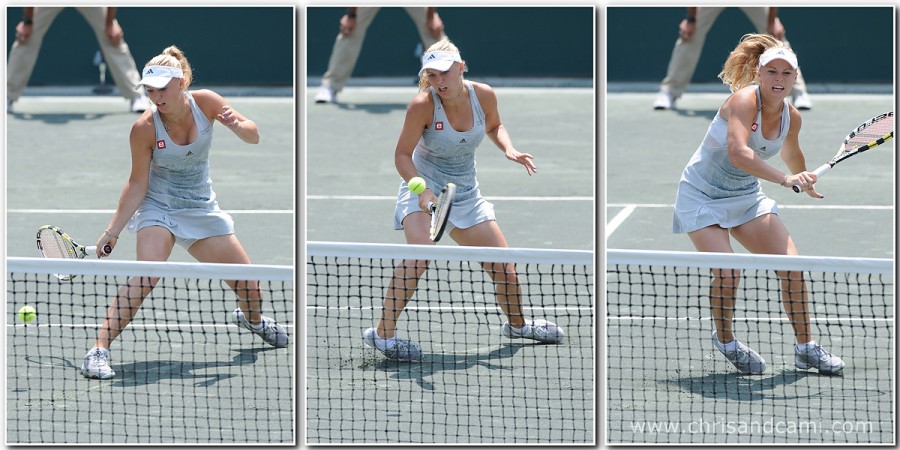 As soon as I got back to the Media Tent after shooting Caroline Wozniacki’s match against Vera Zvonareva in the Quarters at the Family Circle Cup, I was bombarded with “DID YOU GET IT?!?”  Here are the three key frames out of about 10 in the sequence.  I truly feel horrible for Caroline.  She’s such a sweet girl and was definitely my hope for our next Champion.  I hope the injury is minor and she can recover quickly.  I believe she has what it takes to reach number 1 in the world!

WOW!  I wasn’t sure we could top Thursday’s action.  But Friday really was AMAZING!  In spite of a vip sponsor assignment downtown and a few off-court shoots, I got to see a lot of great tennis today.  By the excitement of the fans, I think they’d probably agree!  Here are a few picks from the today’s shooting.  As always, head over to www.chrisandcami.com/blog, www.familycirclecup, and www.wtatour.com.  Plus a few players like Vera Zvonareva are using some of my shots from the Player Party on their Facebook pages if you happen to be a “fan” of theirs.  J  Fun…

There were some heavy hitters attacking the courts on Thursday.  Thunderous forehands, stinging backhands, and crisp volleys came from impossible angles and all corners of the clay.  Here are just a few fav’s from the day.  Visit www.chrisandcami.com/blog, www.familycirclecup.com, and www.wtatour.com for more…

What is today?  Oh yeah, it’s Wednesday…er…Thursday…nope definitely Wednesday!  J  Being one of the official photographers of the Family Circle Cup means loooong hours of non-stop “go-go-go” shooting.  Before you know it, one day just runs into the next.  But it sure is gratifying and is an amazing way to see the INSIDE life of some of the world’s greatest tennis players!  Here are a few shots from today…both on and off the court.